Native apps are designed and delivered for a specific operating system – Android or iOS. The sales platform for these apps are the well-known App Stores. These users reach the apps and download them to their smartphone.

Compared to native apps, Progressive Web Apps are not available in any App Store. They can be found as websites on the World Wide Web. In addition, they combine the advantages of responsive websites (adaptation to the respective device) and the advantages of native apps (all app functions). They are accessible via the Internet browser and the user experiences the typical handling of a native app. They can also be used in offline mode, as their contents are stored in the cache of the device and so offline all important elements are loaded. So far, however, only all Android app functions are supported, e.g. the sending of push notifications. 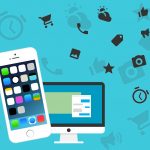 Widget as an extension for your own websiteGeneral, Product, Tips